The Cattolica of Stilo in Calabria

Interdisciplinary knowledge for the enhancement and promotion of the monument
Caterina Gattuso, Dorjs Candido

The Cattolica of Stilo is the most important example of Byzantine-era religious architecture in Calabria and one of the most valuable in Europe. Its strong architectural identity is due to the harmony of its plano-volumetric conformation and to an aesthetic aspect that stands out even more in relation to its location in a suggestive territorial context. The paper describes a cognitive process relating to the monumental building divided into three phases, aimed at bringing out significant elements from a historical, architectural and building material point of view. The interdisciplinary dimension of the investigation was enriched through laboratory tests aimed at the chemical characterization of a representative sample that allowed to obtain original information on the constitutive bricks. As a whole, interesting elements of knowledge arise, also useful in order to outline possible enhancement and fruition strategies, which are proposed in the last chapter. 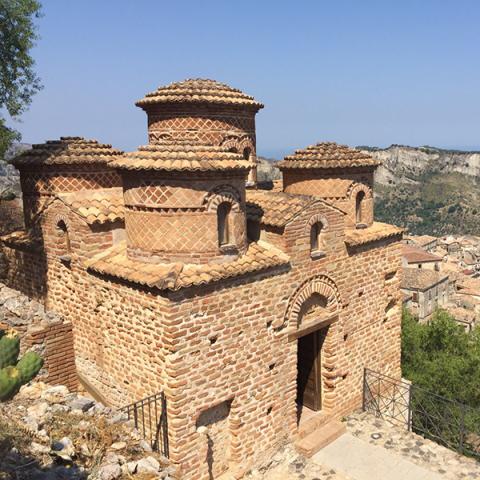 THE TRIUMPHAL ARCH OF THE CARAFA FAMILY IN BRUZZANO (REGGIO CALABRIA, ITALY)

The region Calabria has outstanding cultural heritage that expresses the succession of numerous civilizations over time, from prehistory to present day: from Bruttian and Sicel populations to the Magna Graecian colonization, the Roman domination, and the Byzantine, Norman-Swabian and Angevin civilizations. The historical and architectural heritage reflects the cultural stratification of the area, which shows through the monuments of extraordinary beauty erected by local populations. This is the case of the magnificent Triumphal Arch situated at the entrance of Bruzzano, a town in the Province of Reggio Calabria, which was built in the XVII century to symbolize the power of the Carafa family, the Dukes of the same town, and to express the devotion of the population towards them. Besides having a monumental structure, the triumphal arch has surfaces completely covered with frescoes. Unfortunately, its state of conservation is not appropriate to its value.

The urban fabrics, and particularly those that have formed as a result of spontaneous expansions, are characterized by the presence of areas of result, free spaces and courtyards scattered in a disorganized manner. That their fragmentation may represent an interesting opportunity to set a unique and original approach to restore and enhance the environment. The study, to this end, illustrates a methodological proposal which aims to highlight the identity values of the architectures that delimit these spaces. The objective is to activate the synergies times to put in relation spaces and architectures to enable good practice by proposing the design of small interventions of green areas, aimed to furnish and make it comfortable spaces, so as to make them attractive and so as to facilitate their attendance and the rest from the people.
It is the identity elements of the architecture that define the space that you can find elements of recognition peculiar, on the basis of which identify the correspondences to create relationships that will generate mutual growth in value. The method is therefore proposed criteria to be used to achieve a revitalization of areas, such as the inclusion of "green volumes" designed by referring to the floral decorations consist of easily traceable in the ornate facades of the buildings that surround them.

THE MOSAIC FLOOR OF THE VILLA RENDANO FROM COSENZA

In the historic centre of Cosenza rises an imposing and elegant villa realized in the late nineteenth century, which since July 2012 belongs to the Foundation "Attilio and Elena Giuliani" Onlus. Better known as the "Villa Rendano" named after the family that he gave the course to its construction, it is characterized by having many rooms whose mosaic floors are variously decorated. In particular, on the first floor of the villa there is a large room with an extraordinary fine floor, made using the technique of " beaten earth terrace " called also the venetian terrace.

The mosaic floor of this room, is a rectangular plan and is distinguished by having a singular composition formed by the combination of three main colours of tiles, white, black and yellow ochre, which contribute to the realization of geometric patterns. In particular are delineate the arches which, repeated modularly, gives rise to an ordered and symmetrical frame which is connected in the corners generating stylized design. In the center of the frame of the mosaic floor stands out a large shield contoured bordered by a black and yellow ochre that encloses a big winged pistrice, realized by using particularly black and white tiles.

The work is proposed as a contribution aimed to valorise the architectural structure through a methodological approach based on a cognitive diagnostic plan structured in phases which provides analytical investigations and descriptive information, focusing attention on the chromatism of the mosaic floor of the room, not well known, by the characterization of the granulates constituent developed through specific colorimetric investigations by carrying out the measures in site which were subsequently processed using special software.