THE EXPERIENCE OF THE UNFINISHED

The object of study is the experience of the “Unfinished” through the analysis of one of the most significant cases inside Italy’s landscapes: the large sport complex designed by Spanish archistar Santiago Calatrava in Tor Vergata. La Vela, as people use to name the remains of the project started in 2005, is a mere technical artifact. In its incompleteness the entire large concrete basement assumes the sense of transferring to the ground the weight of the large steel frame construction placed higher up. The unfinished complex seems like a contemporary archaeological site that emerges onto the surface from beneath the earth and revealed itself as a modern infrastructure, not built with brick and stone, but with concrete and steel. It is an abstract and complex construction, a white fin in the landscape, a faraway landmark scattered in the southern suburbs of Rome with an articulated and detailed interior landscape.  La Vela is in progress, a place visible to all, but inaccessible; a building site frozen in a pause too long to promise a breakthrough. The only activities at La Vela seem to be those of the various movie sets that take place in the site making it a sort of second Cinecittà.
The building of the Swimming Stadium is an opportunity for a critical examination of these monuments of inconclusiveness which outline the entire landscape of the peninsula. The extension reveals an unfinished Italy emerged in the last forty years; a new territory independent from specific projects which express itself in a second nature, mainly made of reinforced concrete. La Vela undoubtedly deserves special consideration in the vast array of unfinished projects. The size of the edifice, its visibility and its position fully inscribes in the catalogue of these emblematic works without purpose. They are almost works of involuntary art, unaware of the dynamics that produced them, outside the premeditation of their projects. These empty infrastructures increasingly constitute a necessary field of action for architecture, without necessarily denaturing the testimonial value of their unfinished style when dealing with their recycling. 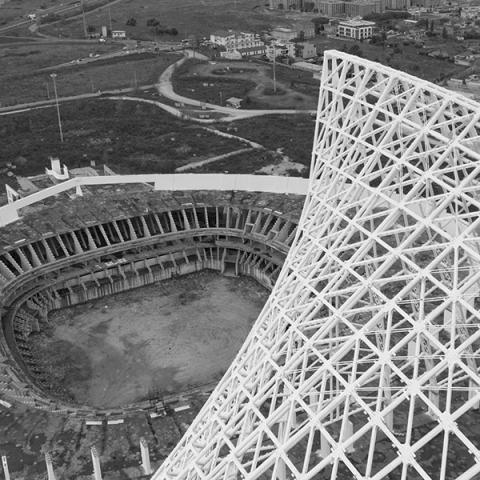